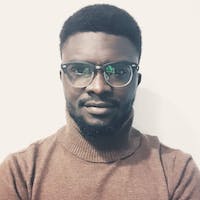 This article was born out of a need I had a few months ago while working on a web project. I needed to create a carousel component in the page without adding another npm package into the mix of the already bloated project 😉, I decided to document the process of creating the carousel to remind my future self and to help someone who may need it someday.

Prerequisite Knowledge: You should be familiar with Javascript, ReactJs, and usage of React Hooks, working knowledge of SASS or CSS is also needed.

Note: you have to install Nodejs on your computer

On your favorite terminal run

the command bootstraps a React app having this structure when opened in the text editor.

On the terminal, run the following (while in the root folder of the project)

this creates two files inside the src folder, inside the Card.js file, add the following lines of code:

this is needed so as to give different names to the cards that will be rendered on the page. The name will be passed into it from the parent component later.

Inside the Card.scss file, add these styles

When you think about a carousel, you'd realize it's mainly about scrolling the cards to be displayed to a user with the use of an arrow from left to right; that is exactly the approach employed in the creation of the carousel component here.

Let's begin, download the arrow that will be used to control the cards inside the carousel component. You can also decide to use an Icon from one of the many icons services like Fontawesome, but for this tutorial, SVG files were downloaded, create an asset folder inside src to keep the files, like this

Inside the App.js file, replace the code in it with the following lines of code.

The code above has a few things I'd like to explain briefly, first is the useRef Hook introduced to ReactJs in version 16.8.

React hooks allow you to use state and other React features without writing a class - reactjs.org

The usage of refs in Reactjs was traditionally meant to allow the developer to directly access an HTML element in the DOM(document object model) and carry out an operation on the particular element. Before hook, there would have been a need to write out the exact function to be performed using normal Javascript syntax, but with the introduction of the useRef hook, it now allows us to pass the action in ReactJs directly as will be seen in the next code block. More info on this can be gotten here.

Also, note that the variable housing the hook in question

was called on the carousel class

Adding the following code to the App.scss file

we are presented with this simple, UI for our carousel

Recheck the App.js file, you'll notice the button tags having an onClick action. They both refer to functions next and prev which holds the logic behind the forward and backward movement of the carousel.

Let's add that now, inside the App.js file, add the following snippet of code inside the App function before the return statement

With this function written, the button begins to move as the cards as intended.

Thanks for reading up to this point, if you find this helpful, kindly give some likes, also, if there's a better way this could have been implemented, kindly let's discuss via the comment section.

The code is hosted on Github here.

You may be able to BS through a philosophy course by sounding like you kind of know what you're talking about, but software is not so forgiving. Get your logic right or fail. dissertationwriter.org